Is your daughter addicted to social media?

Perhaps you are worried because she spends too much time on her phone.

You are not alone. One of the most common worries parents have is around the topic of social media and the negative impact it is having on the lives of their daughters. Like them, you’ve probably agonized over whether or not to take the phone away. But the truth is smart phones & social media aren’t going anywhere. Instead of avoiding the problem, try giving your daughter the skills she needs to find a balance between her online world and the real one. 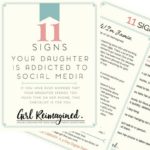 Parents ask, “do you think she’s addicted to social media?” The answer; “yes.” Most teenage girls spend more time online than they do anywhere else. Smart phones have become a social lifeline for girls. But if ask the right questions, many will admit that they feel overwhelmed trying to “keep up,” online.

“Who’s fighting with who?” “Is she mad at me?” “Look at how many people are having an amazing time, and I’m at home alone in my room.” “She said she was home sick, why is she on his Snapchat story?” “Only 10 people have liked the selfie I posted a few minutes ago, do I look ugly? Should I take it down?” “He comments on all her pictures, does he like her more than he likes me?” “I thought we were best friends, why is she posting so many pictures of her?”

These thoughts, and many more, flood the minds of teenage girls. The pressure to create an desirable life online is intense.

Example: I have a 14-year-old client who plans her entire weekend around her Instagram photos… outfits, location, & who she wants to be seen with are all details planned in advance. The goal is to look like every weekend is full of friends, fun, and gorgeous selfies.

I’ve had the opportunity to witness a monumental shift in “girl world.” I began working with teenage girls in 2000 as a high school cheer coach. Very few of the girls had phones and social media didn’t exist. High school was still very much like it was when I was young… academics, friends, dating, experimentation and some drama.

Fast forward 5 years… cell phones became more common and MySpace gave young people the ability to be whoever they wanted online. Now, 12 years later, teenagers spend more time online then they do anywhere else. Their online world is as important (if not more important) than the real one.

The Internet has caused kids to grow up too soon and has exposed them to more than parents can even imagine.

A young client of mine told me last night that she has a crush on a boy, and then she began to cry. She said that someone Photoshopped her face, along with her crushes, onto a photo of two people having sex. And then this person posted the photo online. She is 13, and dealing with cyber-bullying, pornography, and public humiliation. Things have changed.

I’ve noticed a dramatic increase in anxiety among girls that I work with… the most common form is social anxiety. Based on over 5,000 hours spent talking with teenage girls one-on-one, my opinion is that smart phones, social media, and the pressure to be “in the know,” 24-hours a day, 7-days a week has caused a large part of this anxiety. At an early age girls get smart phones and full access to the Internet with little or no education on how to manage.

The #1 Sign that Your Daughter Struggles with a phone addiction

Have you ever taken away your daughters phone? If so, you know all about the meltdown that follows. BUT, after a few days, did you notice a glimpse of her old personality? Did you have your daughter back?

Girls would NEVER ask you to take their phones away but after the panic settles they are often relieved to have a break. It’s exhausting to manage an online persona. It takes so much time and energy that girls often have nothing left to give their families at the end of the day.

Here is what you can do…

If 5 or more of these signs look familiar, she needs a little extra support from you. I know you are trying because you are here reading this post. Don’t give up!

Many parents feel so lost that they turn a blind eye and that is one of the biggest mistakes you can make. It’s hard to stay on-top of all the latest apps, or even to know how to talk to your daughter about her online world, but you’ve come to the right place. We can help.

Coming to Girl Reimagined!: The 3-Day Digital Detox for Girls

Do you have an anxious teen girl? Watch Jamie’s free masterclass for parents for tips and strategies on how you can help.
Click Here